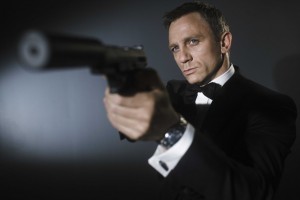 Last night I had a dream we were spies in the British secret service with our own Aston Martin spy cars and we were on operation against bad guys at Westfield Parramatta. I was disappointed when I woke up and it wasn’t real.

Somehow we were recruited after getting involved in an international incident. We were issued suits (MI6 spies all wear suits as you know), Walther PPK and Aston Martin DB9s. No training – they were already impressed with our resourcefulness under pressure. We didn’t know who the bad guys were but they were planning something underneath MI6 headquarters (which turned into Westfield Parramatta halfway through the dream). We were more the Daniel Craig styles spies – full on action running and jumping and shooting two guns at the bad guys while flying sideways in the air in slow motion. At one stage we had to jump and slide down the shiny metal bit between two escalators while shooting at bad guys at the bottom. In the end we blew up Westfield with the bad guys still in it to stop them. Bit of collateral damage.