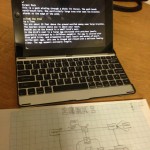 It is pitch black. You are likely to be eaten by a grue.

If this sentence ever struck terror into you then like myself, you probably have fond memories of text adventures, or interactive fictions games from the early 1980s and spent many hours plotting maps on grid paper or trying to “hit the troll with the elvish sword”. Well now you can relive those memories with the release of “The Lost Treasures of Infocom” for iOS.

Back when computer graphics were pretty much non existant and RAM was measured in kilobytes, Infocom were the masters of the text adventure genre, with over 30 games released for a variety of platforms ranging from the TRS–80 and Apple II through to the Apple Mac and IBM PC. This was achieved by writing the games in a LISP like language called ZIL (Zork Interactive Language) that was then run on an interpreter called Z-Machine written for each platform. While most other text adventures used a simple verb-noun combination, for example “get sword”, Infocom had a much more sophisticated parser that could understand a variety of sentences, such as “put the bottle in the bag”.

The golden era for text adventures was the early to mid 1980s however despite a takeover by Activision, the advent of improved graphics and a number of bad decisions meant that Infocom closed their doors in 1989. Since then the titles have been republished a number of times starting with “The Lost Treasures of Infocom” in 1991. This isn’t the first time that the Infocom adventures have been released for iOS, due to its interpretive nature a GPL interpreter called “Frotz” was written back in the 1990s and has been ported to just about every platform imaginable including iOS. This release from Activision is available as a free download from the app store and comes with one game – Zork I with the rest of the library available as In App Purchases.

So why should you buy “The Lost Treasures of Infocom”? Well firstly the copyrights to the games are still held by Activision, and to download them from the Intenet would be violating the copyright. However more importantly is the “extras” that this release includes. The original games shipped with a variety of extras (or feelies as they were referred to) which included manuals, story books and even 3D comics and a “scratch and sniff card” in one! The game includes reproductions of all of the box box art, feelies, instructions manuals and all the little bits that came with each game. The physical items such as patches, coins etc are included as 3d rotatble objects. You can purchase individual collections such as the Mystery Collection, Fantasy Collection or all maps, but for $10.49 you can instead get the entire game library and for real fans this is the way to go. The only omission is The Hitchhiker’s Guide to the Galaxy – as a licensed title I imagine there was some issues with licensing – hopefully that is resolved in time. 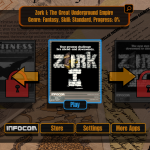 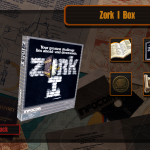 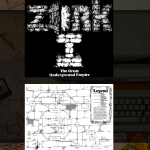 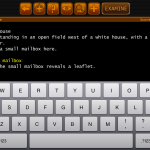 So how does it play? The game play is pretty much the same as it was in the 1980s, that is you could be sitting in front a Terminal screen and most people wouldn’t know the difference! There are a few modern touches, if you could call them that. The game features auto-complete so you don’t need to type out the full comand. A row of buttons for common commands has been included at the top including a compass rose for direction, back and help. If you have purchased the maps and Invisiclues, you also have shortcuts to these. “Back in the day”, Invisiclues were sold seperately in a little booklet with a highlighter pen. The clues were printed in a type of invisible ink, you found the question you needed help with and highlighted the hidden answer to read it. This has been nicely recreated with a swipe to reveal the answers. Even if you manage to finish the game I’d recommend reading the clue afterwards – some are quite funny such as;

Where do I find a machete?
There is none. The game must have some limitations. You can’t expect to walk to the >nearest airport and fly to London to see the British Museum…

So who would the game appeal to? This is aimed squarely at the nostalgic market, with the attention to detail and little extras added. If like me you cut your teeth on a Commore 64, TI–99/4A or Commodore Amiga, played some of the Infocom games but didn’t have the pocket money to buy them all, prepare to lose many hours in them. Do yourself a favour and buy a book of graph paper – real adventurers don’t use the in-game maps (unless they REALLY get stuck). If you’ve heard about text adventures and don’t know what all the fuss is about, download the free game Zork and check it out – you might like it. And don’t forget the lantern, else you might get eaten by a grue…